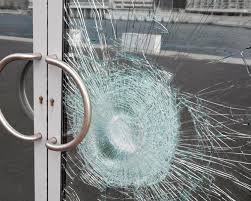 What are the differences between tempered glass and laminated glass?

There is a large difference between these two types of glass.  In the end, the main difference all boils down to how the glass breaks.  Tempered glass breaks into smaller pieces, and laminated glass will crack but remain together due to the plastic layer that is baked between the two pieces of glass.

Tempered glass is a finalized product.  Once the glass has been tempered, it can no longer be altered.  Depending on the intended use of the final product, first the glass would be cut, then polished.  Lastly, any holes or notches would be drilled into the glass. After all of the fabrication was complete, the glass would be run through a tempering oven and the glass baked at anywhere between 800 and 1400 degrees, depending on its thickness.

There are a couple reasons to temper glass.  One is to strengthen the glass, after being tempered the glass becomes very strong on its face, making it much harder to break,  The other reason is safety.  When or if the glass does break, instead of breaking into large shards of glass that you would normally see, it breaks into many smaller pieces.  The smaller pieces are still very sharp.  However instead of someone getting cut badly from a large piece of glass, what usually happens is they will end up with a few smaller cuts.

Laminated glass can be cut and fabricated.  Both pieces of glass need to be cut separately, and then the plastic needs to be cut.  It’s a time consuming process and lots of practice is required to be able to do it well.

When is safety glass used?

All of the glass in your car is safety glass.  The windshield is laminated glass so when a rock or pebble is kicked up from the road, it may break the windshield glass, but it will just crack and remain in tact.  The doors and back glass of the vehicle are normally tempered glass, however some manufacturers have switched to using laminated.

Any glass installed into any door, or next to a door will be a type of safety glass.  Some businesses such as convenience stores prefer to use laminated glass in their storefront doors because it makes it more difficult for someone to break in.